RU’s Views: Why, As a Jew, I am Pissed off About Captain America: Steve Rogers #1 (SPOILERS)

Written by GHERU on Thursday, May 26 2016 and posted in Features
Tags:

Is there so little respect for creators’ intent that Marvel has allowed this to happen?

Source: I was asked

In order to combat BleedingCool's (totally not) completely biased reasons for spoiling Rebirth but not Captain America: Steve Rogers #1, The Outhouse went on a mission to "break" the spoilers as soon as we could (with a stop over in speculation land). With the help of modern technology and quite a bit of gusto we were able to reveal that, according to this one issue, Steve Rogers, Captain America, has always – for 75 years – been a member of Hydra.

This makes no sense. And, yes, I know the industry I am talking about.

This makes no sense from a story point of view. Although it's been clear for well over a decade how little Marvel (and DC) respect - or even care about – their continuity or the readers – making the man who has "killed" the leader of Hydra at least 6,547 times is beyond asinine.

Now, I'm usually one to give "them a chance" to tell their story since we all know that it will be temporary with an easy fix – especially since Tom "his mouth is open so he's lying" Brevoort said that this change to Rogers is totes for realz – but making Captain America someone who has always held Nazi beliefs completely changes the character to the extent that it basically nullifies 75 years' worth of history and stories. One could argue that Hydra is 50% less racist than the Nazis, but that's after decades of stories and history.  This issue is saying that 75 years ago, when Hydra and Nazis were one and the same, Rogers was one of them.

This totally permanent change (they really mean it this time) is also a slap in the face to Hymie Simon and Jacob Kurtzberg (Joe Simon and Jack Kirby respectfully), the creators of Steve Rogers / Captain America; who Joe Simon described as "our way of lashing out at the Nazi menace." I know that Marvel has spent the better part of 40 years proving just how little they care about Jack Kirby's legacy, but mischaracterization at this level is completely distrustful and goes further than even the most ardent Marvel hater could ever have predicted Marvel would take this.

But, beyond all of that:

As a Jew I find Captain America: Steve Rogers #1 completely offensive. Not because of any of the reasons stated above, but because it's five whole dollars!

FIVE DOLLARS for a comic book! Jews did not, literally, create the American comic book market so that three quarters of a century later they would cost five dollars! Kirby and Simon didn't have Captain America bitch slap Hitler on the cover of a comic book at a time when Nazism was popular in the United States just to have its retcon cost more than two gallons of milk! 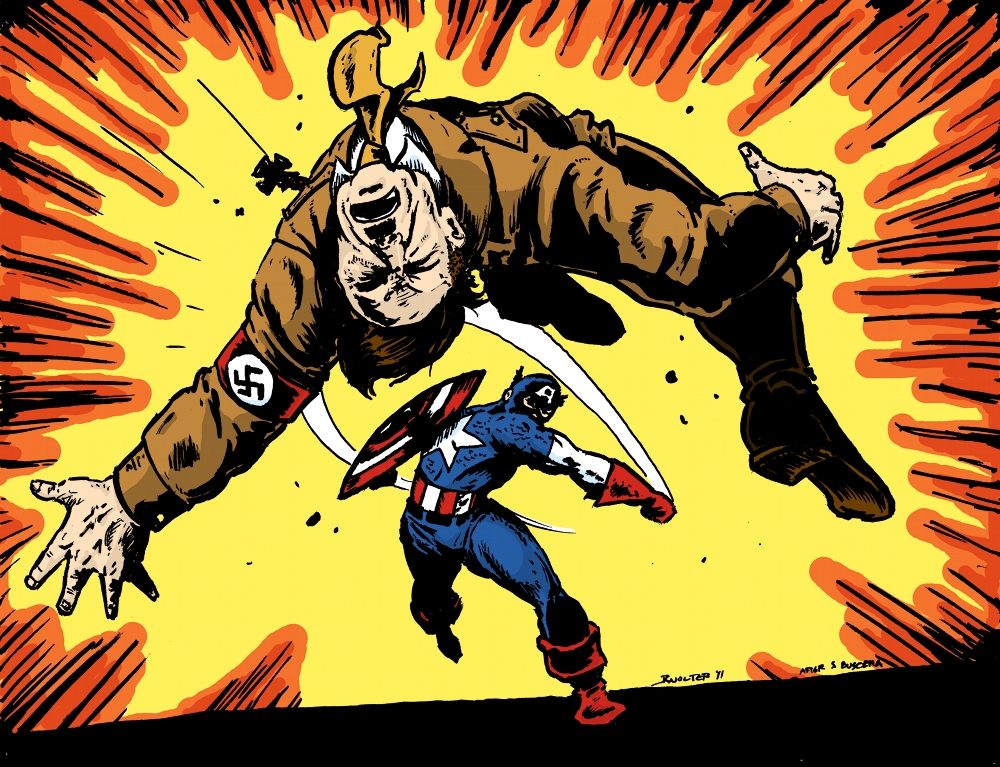