Written by GHERU on Monday, March 18 2013 and posted in Reviews
Tags:

RU takes his talents to the web and RUviews his first webcomic: Punching The Clock, best described as “Two Nerds. One Store. Endless Fail.” ~Humphrey & Manley

Right off the bat I feel the need to confess something; I’m not really all that into webcomics. Sometimes it’s because I rarely find one that I think is good enough to follow rather they seem to be the work of frustrated comic book writers who aren’t good enough to get published, and then there’s Captain America Ground Zero, which is a work of utter insanity that made me weep for humanity. There are other reasons I don’t really follow webcomics, some of which will be explored later in this review.

That being said, I am looking forward to, hopefully, remembering to follow Rob Humphrey and Jeff Manley’s Punching The Clock. From the site’s “Orientation” tab:

Welcome to the Buy Lots, home of Punching the Clock- a weekly series based on the adventures of our very own employees in the wonderful world of retail sales!

In other words, Punching the Clock is a weekly webcomic that is, simply put, Clerks meets Chuck minus the spy stuff. 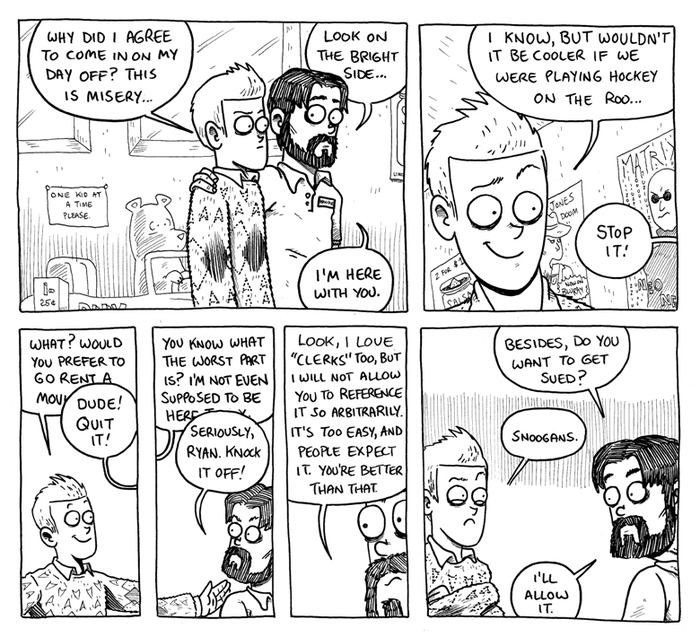 The series centers around two Buy Lots employees, Jeff (the 10 year veteran) and Ryan (Buy Lots’ newest employee at the time of the comic’s inception) who click immediately and spend the next year making fun of everyone else and thriving on Star Wars, zombie, Superhero, and other geeky references. At first the whole thing seems rather mundane and, to be honest, one of many geek themed entertainment options out there, but what Punching the Clock has that most of these other options don’t is skill.

Punching the Clock has the rare free webcomic combination of great writing and great art, and to top it all off, it’s actually funny. I used to work at a Dillard’s department store, and the very first strip of Punching the Clock is exactly what happened to my training class. Some big wig from cooperate was coming to the store and for whatever reason this meant that all trainees had to go to the floor, immediately. Punching the Clock stays true to the retail experience (we hate all of you customers; you suck and deserve to fall into a pile of razors) but also talks to all members of the customer service industry while being funny enough to entertain those lucky enough to never have had work in that field.

Rob Humphrey’s writing is funny, natural, heartfelt, and is at place in a retail environment, and although there are obviously exaggerations of humor’s sake, none of the jokes are so absurd as to take the reader out of the comic.

Rob’s writing skills are highlighted and complemented well by Jeff Manley’s simple yet very effective art style. I have recently grown to appreciate the complexity and ingenuity it takes to make good black and white art, and Manley only adds to that admiration. Also, if you do what I did and read a ton of these back to back to back you really see how Manley’s skill grows and matures in just over a year and a half. This constant improvement in both art and writing is another aspect of the series that I enjoyed. The creators are not loafing around tossing things together; they learn and get better as time moves on.

One of the things I really like about this series is that it maintains its own continuity, meaning that it is telling a story and is not just a series of one-liners like Cyanide & Happiness. But, like Cyanide & Happiness, the major drawback of Punching the Clock is that it does not read well in bulk. One of the other reasons I don’t follow webcomics alluded to above is my personal flakiness, meaning that I do not remember to check on the comic on a regular basis and I have a lot of “catching up” to do when I miss a few months, and I became numb to the humor of Punching the Clock when I read the first six months of the strip in one sitting. This is not a deal breaker since the series is not written to be read all at once, but rather weekly, and most other bits of comedy get really old in marathon form (except Phineas and Ferb.) Another thing about Punching the Clock is that it is written for geeks by geeks and I am not sure how much entertainment non-geeks will get from the references and jokes.

Punching the Clock is really good. Reading this at work was very dangerous because of how many times I laughed loud enough to be heard down the hall, and I hope to be able to read the series every week. There is a currently a Kickstarter campaign set up to help fund the newest collection of strips, and I’ve already donated enough to get all three collections when the campaign is done. So, drop House of Flashpoint (aka: Age of Ultron) and spend the money you would have on that towards this Kickstarter, you will not be disappointed. 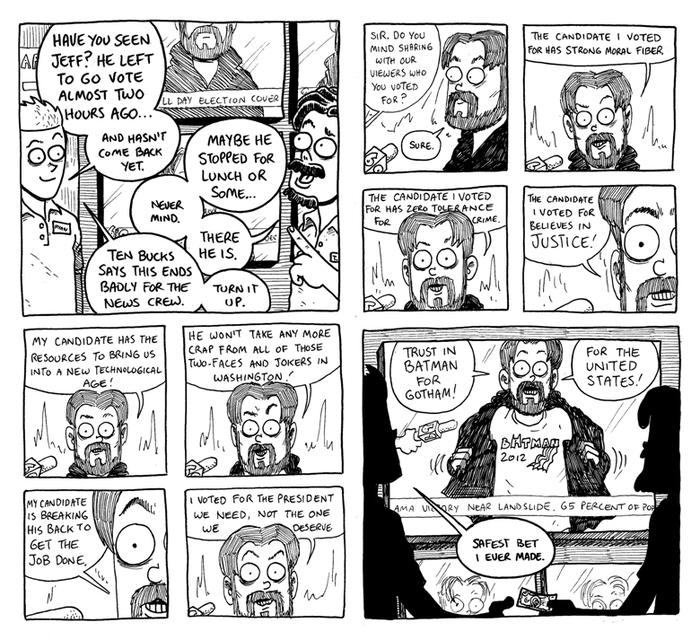