Written by Writrzblok on Saturday, March 31 2018 and posted in Reviews

The Winchesters. The Scooby gang. Let's do this.

Like many other folks growing up, I watched Scooby Doo. My first experience with the crime-solving canine and his carnivorous companion Shaggy was the "Scooby Doo, Where Are You?" reruns that ran in syndication. From "Where Are You?" to "Be Cool, Scooby Doo," I've been on board for whatever crazy, madcap misadventure Mystery Incorporated (my favorite incarnation of Scooby Doo, by the by) was thrown into next. Seeing the Mystery Machine driving around with the whole gang brings back childhood memories of sitting in front of the TV and spacing out while being engrossed every predictable, but enjoyable episode.

I watched Supernatural pretty much from the beginning. Buffy the Vampire Slayer was still fresh in my mind and this had a similar feel, though it also had a bit of Hardy Boys flair to it. From Ol' Yellow Eyed Azazel in seasons one and two, Lilith in season three, the angels and the apocalypse in seasons four and five, I was all in. I'll admit, around seasons six through eight I wasn't much into it. I checked back in around the tenth season and have been keeping my eyes on it since. It's still an enjoyable show, though in truth, if the show had ended in season five, I'd have been alright with that. But then, we wouldn't have the subject of this review.

"Scoobynatural," a bona-fide episode of Supernatural where brothers Sam (Jared Padelecki) and Dean (Jensen Ackles) Winchester have an honest-to-Chuck crossover with Mystery Incorporated, was announced in May of 2017. It was just after the action-horror series had been picked up for a thirteenth season; and I'd kick myself if I didn't laugh at the coincidence since there was a cartoon called "The 13 Ghosts of Scooby Doo." From the moment the episode was announced, I was on board, signed up and ready to bask in the glory of what could be either a damn good filler episode or a glorious trainwreck. Regardless, there was no way in hell I was going to miss this.

Ten months later and "Scoobynatural" has arrived. And it was so worth the wait. The jokes and one-liners were hilarious, the animation was very nice, and the story, even if it was a filler, was very much a Supernatural episode while showcasing the good and the silly of a Scooby Doo episode. The interactions with both The Scooby Hang and the Winchesters (along with Castiel, played and voiced by Misha Collins) felt genuine despite the clash in styles, mentalities, and wardrobes. 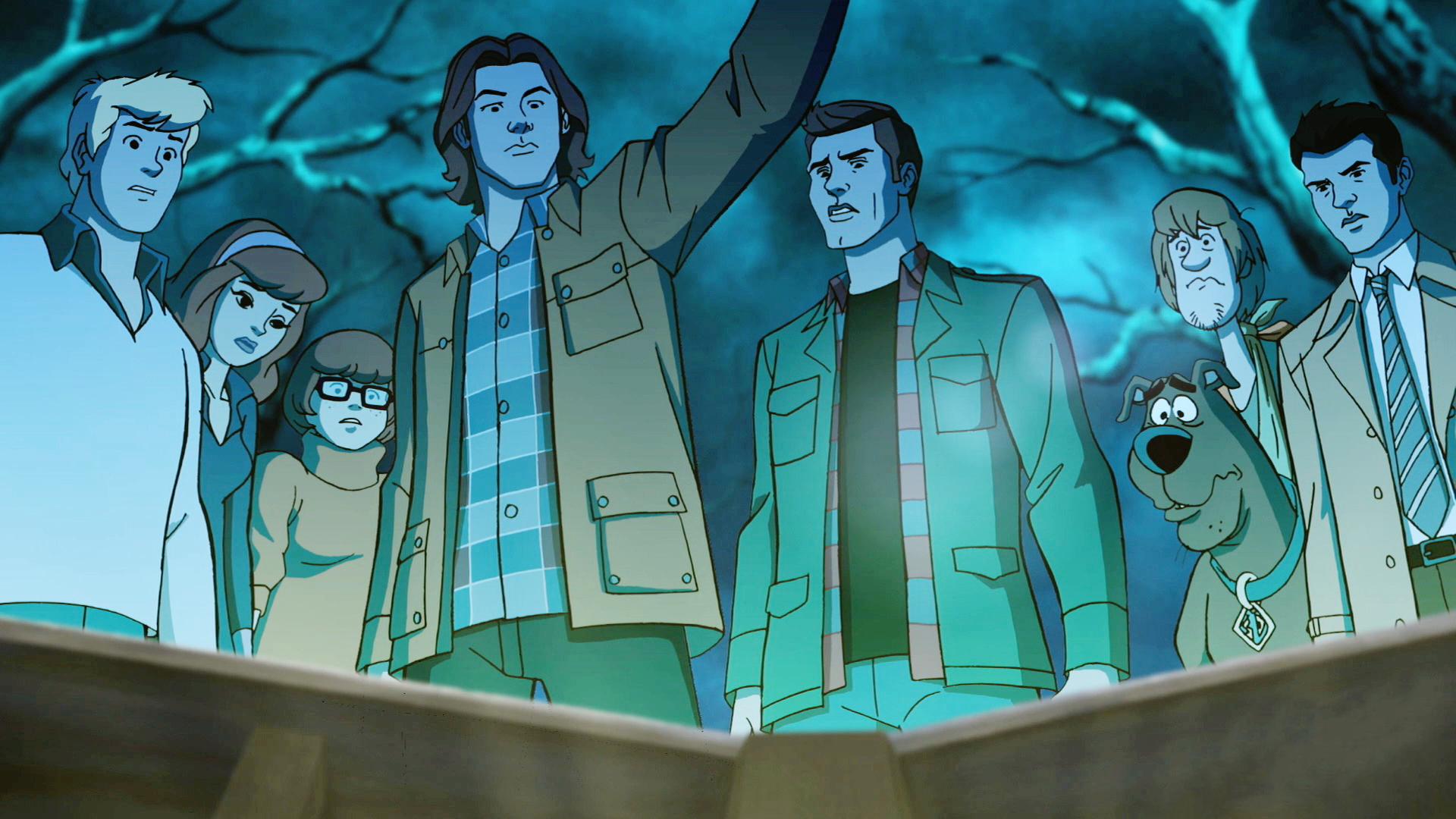 The episode begins with Sam and Dean in a pawn shop, fighting what looks like a giant possessed stuffed dinosaur. No, really. This is a show where a giant Teddy Bear that got wished into existence tries to blow its own brains out in a nihilistic suicidal depression. This scene, however, was played much more light-heartedly. Well, as light-hearted as this show gets, anyway. After defeating the possessed cotton-filled carnivore, the shop owner lets them have whatever they want. And Dean spots a big-screen TV for his own personal "Dean Cave" or "Fortress of Deanitude." Yes, those words were said, and I dug every second of it.

When Sam and Dean try out the new TV, they find themselves transported into an episode of "Scooby Doo, Where Are You?" However, it isn't just ANY random episode they find themselves in, but episode sixteen of season one, "A Night Of Fright Is No Delight." In this story, Scooby is named an inheritor of an eccentric millionaire and he, along with said millionaire's remaining family members, must stay the night to gain a million-dollar inheritance. However, with the Winchesters now part of the story, things get a little spookier and a lot messier.

The modern-day cynicism of Sam, Dean and Castiel provides a comical juxtaposition to the innocent, pure, and almost blissful ignorance of the Scooby Gang. Dean, a bit of a horndog, tries to score with Daphne and fails spectacularly in every attempt. He also harbors a country-mile long jealous streak for Fred. When the Scooby Gang see the bodies of people who have been brutally murdered, Fred smiles and just tells the gang "We've got a mystery on our hands" to the concern of Sam and the consternation of Dean.

The clincher in the episode is when this version of the Scooby Gang is confronted with the notion that monsters are real, despite their many adventures up to that point that showed the contrary. Other stories and episodes in the Scooby Doo franchise have delved into the "monsters are real" territory with varying results. Here, the episode shows them genuinely losing their collective shits, with the best line going to Daphne saying, "Am I going to Hell?" Shaggy seethes with righteous indignation over the many times he and Scooby weren't believed, Velma has a near breakdown while Fred beats his head against a tree trying to wrap his mind around the revelation. It's so much fun to watch and a refreshing, realistic take on the situation.

While some might consider this a bad or disrespectful moment for the characters, I see it as a natural reaction to hearing such news. You must consider this is season one Scooby Doo. Imagine if someone from another show who watched Supernatural throughout its entire run got zapped into a season one episode and basically recapped the entire series up to this point to Sam and Dean? They'd never believe it and these guys hunt monsters for a living. You tell me Dean's supposed to be all calm and cool when he gets told that in season eleven he gets to not only meet God, but save His life, and therefore the universe? Or that Sam leaps into a hell-cage with Lucifer and the Archangel Michael at the end of season five? And for those shouting "spoilers" it's been almost eight years since that last part, get over it.

Deep down. I could sense that while the creators and writers were aware of the silliness and implausibility of Scooby Doo, they loved the innocent charm, wacky hijinks and pure, simple joy the show could bring by just being its goofy, earnest self. If nothing else, it's worth it to see Dean get that bigger mouth he was wanting back in season five's "Changing Channels" or seeing Dean's handprint on Sam's face when he slaps him out of the hysteria of being animated. 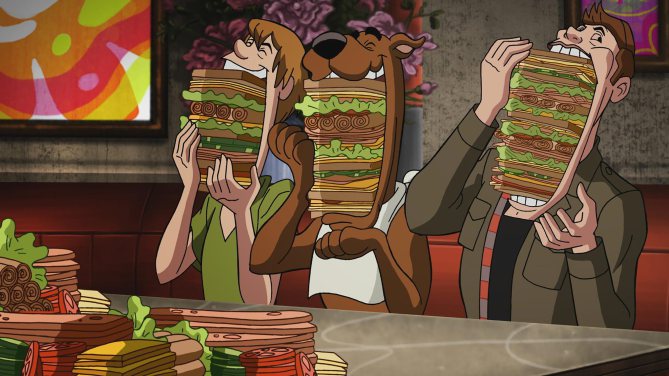 In the end, "Scoobynatural" was everything I could've hoped for. It's easily watchable on its own, free from the continuity trappings of the current season. In a weekend chock to the brim with nostalgia, this is a breath of fresh air that brings up why a talking great dane and his ever-famished cowardly beatnik friend have endured for nearly fifty years.